How WTO Membership and Reform Can Benefit U.S. Dairy 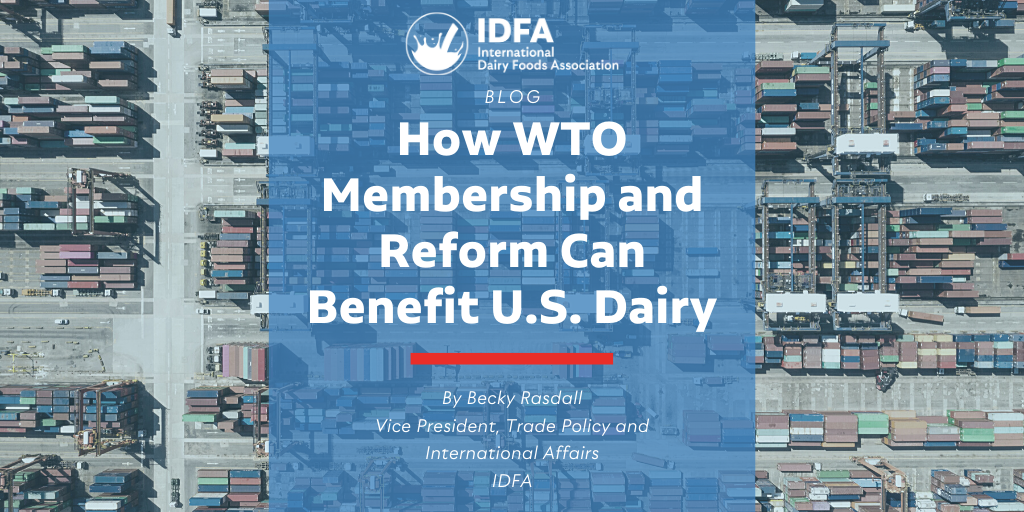 The World Trade Organization (WTO) stands on the brink of significant change, with the candidacy for its Director General (DG) position up for grabs and a host of major WTO member countries, including the United States, calling for its reform. The proposed reform options and DG candidates have the potential to make a difference for the dairy industry due to the WTO’s focus on legal disciplines surrounding all varieties of dairy regulations and economic policies. Every governmental decision for the U.S. dairy industry has the potential to be considered, revised, or challenged by other countries under WTO rules – everything from the recent trade mitigation payments made by the U.S. Department of Agriculture, revisions to the Pasteurized Milk Ordinance (PMO), and the safeguard and licensing programs the United States applies to dairy imports.  And in many current WTO reform proposals being discussed, many of these trade-impacting rules are under reconsideration.

With nearly $6 billion in global U.S. dairy exports, a reformed WTO is essential for the global competitiveness of the U.S. dairy industry.  A reformed WTO with a strong DG has the opportunity, for example, to open opportunities in India by reducing its maximum tariff rates allowed, or to remove some of China’s imbalanced advantages within the WTO by removing its “developing country” status.  A reformed WTO has the opportunity to revisit export subsidies that damage global prices and are hidden under veils of government programming in other countries.  A reformed WTO could change the preferential treatment the United States gives other countries for their imports into the United States.

So, what is IDFA doing about it? In a letter sent to U.S. Trade Representative Robert Lighthizer and leaders of the Senate Finance, House Ways & Means, and Senate and House Agriculture Committees, a coalition of 62 leading U.S. food and agriculture organizations, including the International Dairy Foods Association, are calling for continued U.S. membership in the World Trade Organization (WTO). The letter calls for effective WTO reform that would enhance the ability of American agriculture to access foreign markets and maintain transparency and accountability critical to future export growth supporting American jobs and identifies characteristics desired in the next WTO Director General.

The letter notes the need for the WTO to institute updated rules in order to keep pace with global economic change and calls for increased member accountability. A transition in WTO leadership presents the opportunity to successfully implement reform and reinvigorate its negotiating function under a new Director General, which is necessary to achieve progress on a wide variety of international agricultural trade reforms. You can read the letter here.

IDFA is also part of key discussions with U.S. and global government leaders about the direction of the WTO and the need for reform.  As the DG candidate race comes to a close, IDFA looks forward to advocating more directly with the U.S. government on leading WTO reform from within, rather than withdrawing and losing the benefits already attained through the current WTO rules.  For any questions related to how the WTO impacts your business, please reach out to the team at IDFA.