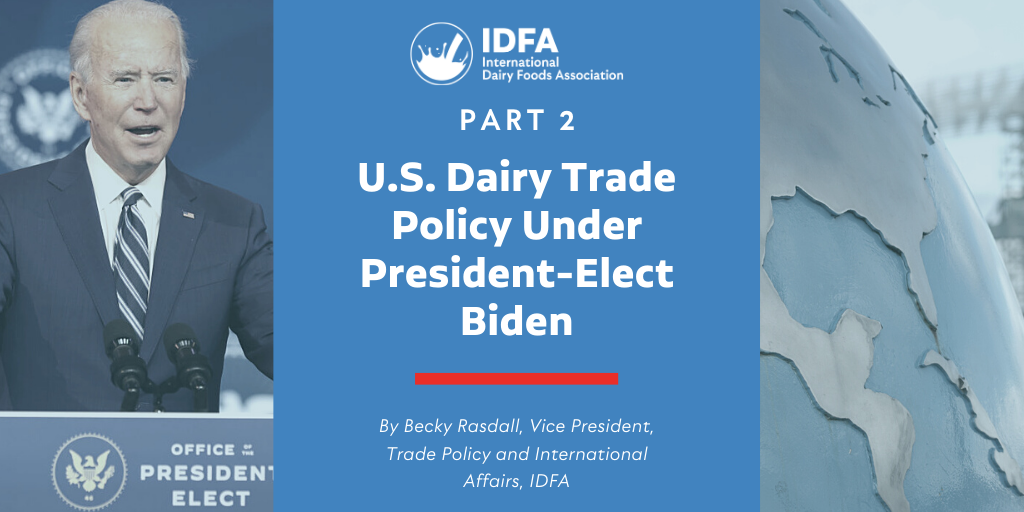 This blog is part 2 of a two-part series by Becky Rasdall, vice president of trade policy and international affairs at IDFA, examining what dairy businesses can expect from the coming Biden administration relating to trade. On January 7, Becky will be hosting a member-only webinar, "Trade Policy 101 for the U.S. Dairy Industry," on the basics of dairy trade policy, what trade policy means in business terms, and how the U.S. government approaches it. You can register here.

With U.S. presidential election results now certified, the U.S. dairy industry quickly needs to grasp what the next four years of dairy trade policy might look like—and how best to advocate our positions given the challenges facing the new Administration. While Biden may not have published a clear set of policy goals related to trade during his campaign, the President-Elect is likely to pursue a more multilateral, collaborative approach due to his widely acknowledged background as a foreign affairs leader while in the U.S. Senate. Read more about this in part 1 of this blog series. Below, I'll dive into the all-important opportunities in Asia and the prospects of Congress renewing Trade Promotion Authority in 2021.

Asia, Asia, Asia: Overall, U.S. dairy exports to Asia have grown by 306% in value in the last 15 years while year-to-date 2020 growth remains steady despite the pandemic, putting U.S. dairy exports on track to beat the past few years in both value and volume. Not only are dairy exports to Asia reaching tremendous heights, there is potential for even greater opportunity for U.S. exports in Southeast Asia in particular. With the advancement of the Regional Comprehensive Economic Partnership (RCEP) and the Comprehensive and Progressive Agreement for Trans-Pacific Partnership (CPTPP) in effect without the United States, there is new pressure on the U.S. government to enter into meaningful negotiations in Asia. For example, Taiwan has openly and repeatedly asked the United States to enter into trade negotiations. Currently the seventh-largest export market for the United States, the U.S. Department of Agriculture (USDA) reports Taiwan has increasing consumption and declining domestic production, creating significant demand for dairy imports.

China is a top five export market for U.S. dairy products by value since 2008 and by volume since 2001 and is a needed outlet for U.S. dairy considering the level of demand the country represents and the increasing amount of milk coming online in the U.S. over the next decade. But China’s government-controlled market and overt interest in developing their own domestic sourcing and export capacity for food and agricultural products underscore the nation’s willingness and ability to turn off U.S. agricultural imports when convenient—a concerning trend pointing to the need for the United States to advance a deeper, more strategic position on trade policy with China, which will be helped along by the nomination of Katherine Tai – a season China expert – for President Biden’s U.S. Trade Representative. Another immediate concern in the region is the U.S. currency investigation into Vietnam, a trading relationship that has really blossomed for U.S. agriculture over the past 10 to 15 years and one the United States could formalize in a bilateral agreement.

Taken together, it will be all but impossible for President-Elect Biden to ignore Asia, and U.S. agricultural exporters are relying in part on Katherine Tai’s nomination to ensure that’s not the case. With more than $2.1 billion in U.S. dairy products exported to the region from January to September this year alone, ignoring U.S. positioning in Asia is simply not an option for IDFA members and the short-term future of U.S. dairy and broader agricultural trade policy.

Trade Policy without Trade Promotion Authority: If Congress does not renew TPA before it expires June 30, 2021, President-Elect Biden will not be able to take advantage of all that untapped opportunity in Asia; or complete unfinished negotiations with Kenya and the United Kingdom; or move to a more comprehensive phase of negotiations with Japan. For the dairy industry, TPA is a necessity for obtaining additional preferential trade agreements that result in reduced and zero-tariff access to global markets. Expect Congress to exert considerable pressure to reform TPA before reauthorizing it, increasing the possibility TPA will fall into political deadlock. This is because party control in the House and Senate are split and some congressional Democrats are still sensitive from President Trump’s failure to follow TPA for some of his negotiations—chiefly, China Phase One. These circumstances will force President-Elect Biden to either work collaboratively with Congress to seek TPA reauthorization, or face four years of trade policy without TPA—resulting in limited negotiations, limited interest from potential trading partners to enter into negotiations, and limited impact on U.S. trade policy. From that perspective, President-Elect Biden faces little to no trade policy legacy without TPA, something many U.S. stakeholders including IDFA cannot abide. IDFA believes TPA must and will rise to the surface of his priorities.

With the United States exporting more than 15% of its domestically produced milk in a variety of dairy products to people around the world, IDFA members rely more and more on effective U.S. trade policy to liberalize markets, provide preferential access, and produce stable, rules-based trading for U.S. dairy exporters. The approaches and recommendations above represent the bare minimum in the short term on behalf of the U.S. dairy industry—yet so much more is possible. The incoming Biden Administration must also enforce existing agreements, invest time and effort in multilateral agreements as well as effective World Trade Organization (WTO) reform, and engage in constructive collaboration with IDFA and other industry groups to better understand what we need to sell American goods abroad to support American jobs here at home. And as they do, IDFA stands ready to collaborate with them to ensure our members’ interests are top-of-mind.

Want to learn more about how these developments impact dairy businesses? Register now for "Trade Policy 101 for the U.S. Dairy Industry" with Becky Rasdall on January 7.

This blog is part 1 of a two-part series by Becky Rasdall, vice president of trade policy and intern...