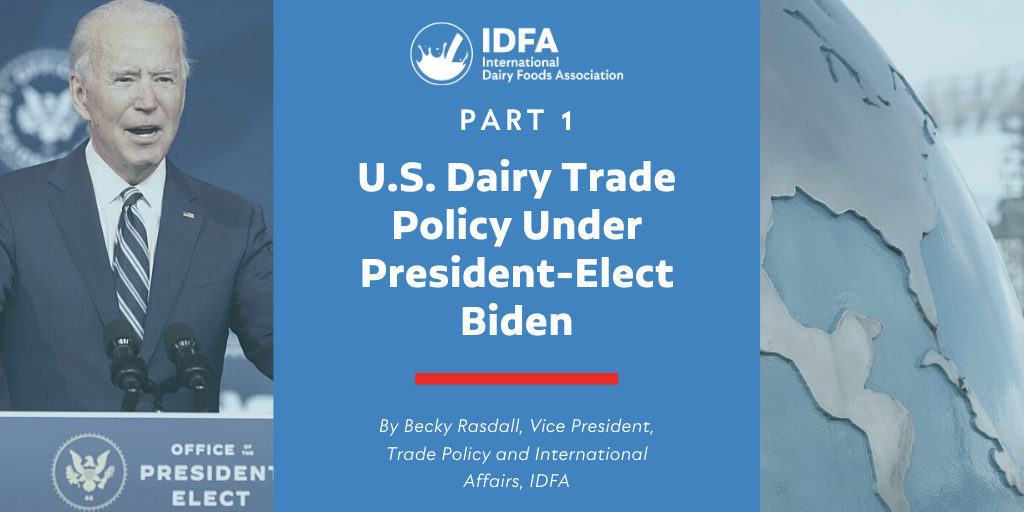 This blog is part 1 of a two-part series by Becky Rasdall, vice president of trade policy and international affairs at IDFA, examining what dairy businesses can expect from the coming Biden administration relating to trade. On January 7, Becky will be hosting a member-only webinar, "Trade Policy 101 for the U.S. Dairy Industry," on the basics of dairy trade policy, what trade policy means in business terms, and how the U.S. government approaches it. You can register here.

With U.S. presidential election results now certified, the U.S. dairy industry quickly needs to grasp what the next four years of dairy trade policy might look like—and how best to advocate our positions given the challenges facing the new Administration. On day one of President-Elect Biden’s Administration, the U.S. trade situation will be complex at best. Specific to those priorities relative to dairy, the President-Elect will face retaliatory tariffs in place with multiple major trading partners; will find the United States less integrated with international organizations than ever and international organizations more in need of substantial reform than ever; will encounter agreements in various stages or phases of negotiation; and all of this while the United States stands on the brink of Trade Promotion Authority (TPA) legislation reauthorization, among many other priorities. Each of these circumstances will require an approach that shapes an outcome consistent with U.S. interests, including those of the American dairy industry.

While Biden may not have published a clear set of policy goals related to trade during his campaign, the President-Elect is likely to pursue a more multilateral, collaborative approach due to his widely acknowledged background as a foreign affairs leader while in the U.S. Senate. Although he claimed during his campaign that domestic priorities including coronavirus and the health of the economy would take precedence over trade upon first arriving in office, IDFA argues that at least three trade priorities will be hard for the President-Elect to ignore in the short term.

Reverse Course on Unilateralism: Perhaps the most widely-expected move for President-Elect Biden will be to carve out a reversal of President Trump’s unilateral approach to trade policy. The question is: To what degree? U.S. trading partners are likely to pressure President-Elect Biden to quickly and aggressively rescind unilateral trade policies made in the Trump Administration—such as a host of retaliatory tariffs around the world or membership in the World Health Organization—and encourage him to adopt the multilateral, collaborative, diplomatic approach to trade policy he favored in the Obama Administration and while in the U.S. Senate. In fact, some wasted no time doing just that (e.g. the European Commission’s recent calls for the United States to enter into negotiations to end retaliatory tariffs under the Boeing/Airbus dispute). Even more, President-Elect Biden’s self-stated interest in prioritizing policies and approaches focused, in part, on climate change and environmental concerns will unavoidably intersect with U.S. trade by forcing U.S. engagement with trading partners already advancing their own trade priorities on those topics. Both Biden and former Secretary of State John Kerry—Biden’s new cabinet-level climate liaison—have promised to re-engage the United States in the Paris Agreement on climate change, and to make climate more central to U.S. foreign relations. The President-Elect will have to carefully balance whatever course correction he chooses with the America first approach that President Trump used to animate national security concerns—especially as it relates to the U.S.-China relationship. Biden will face extraordinary pressure at the World Trade Organization, among bilateral trading partners, and in multilateral venues to be more collaborative. Each of these interactions and engagements will be scrutinized through a new lens colored by the outgoing president’s approach, making course corrections challenging but also giving a Biden Administration room to “get tough” or reboot policies such as Buy American.

Part 2 of this two-part series on trade under the Biden administration focuses on trade opportunities in Asia and the coming expiration of Trade Promotion Authority. It can be found here.

Want to learn more about how these developments impact dairy businesses? Register now for "Trade Policy 101 for the U.S. Dairy Industry" with Becky Rasdall on January 7.