10 Insights Into What COVID-19 Means for Dairy 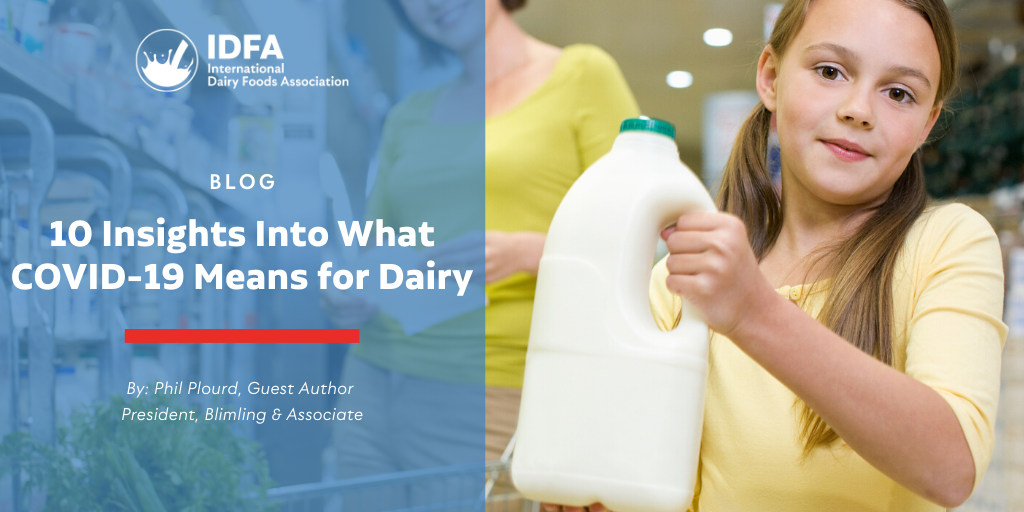 Let’s start with this: We don’t know what’s going to happen with the COVID-19 coronavirus story today,  tomorrow or the next day. The story is moving fast, and we don’t have a template. Over the course of 30 years studying markets, we can only think of two other occasions when “unprecedented” truly applied: after the 9/11 terrorist attacks in 2001 and after Lehman Brothers went bust in September 2008. Now, here we are for a third time.

But, we have some thoughts with potential to lend insight into market and human behavior over the near-term. Here’s 10:

1) We are going to be dealing with considerable volatility on two channels in the days ahead. The ﬁrst dimension is obvious enough: market price volatility. Last week, the Dow Jones Industrial Average lost 2,013 points, gained 1,167, lost 1,464, lost 2,352 and gained 1,985. Dairy and other commodity markets are also gyrating, wildly at times.

The second phenomenon is much less familiar: supply chain volatility. Over the past two years, US consumer spending in restaurants began to equal (and sometimes exceed) outlays in grocery stores. Now, with people hunkering down, things are violently swinging back in the other direction. Consumers are ﬂocking to grocery stores, generating a surge in demand for cheese, milk, butter, yogurt and foods with a lot of dairy ingredients such as frozen pizza. Retailers are upping orders to dairy suppliers. In the meantime, food service orders are likely nosediving. All of this creates product mix, operations and logistical challenges.

2) What happens when consumers’ fridges and freezers are full and restaurants are empty? Will we ﬁnd a big air pocket under demand in two or three weeks? Maybe. But keep in mind that people are going to eat. Yes, we’ve clearly seen hoarding at grocery stores. But it’s also possible that a good number of consumers don’t usually have much food in the house. Sure, they may now have enough toilet paper and red kidney beans for months. But they will likely have to return much sooner than that for perishables, including dairy products.

3) School closings will deﬁnitely hurt ﬂuid milk and other dairy sales, but communities are hustling to put in place measures for providing food to students qualifying for free or reduced cost meals. That will help ease the blow a little.

4) All of this is happening at a time when milk production is rising seasonally. Discounts on spot milk were already bigger than normal before the crisis set in. They will likely grow more in the weeks ahead. We will probably see some milk “dumped” for want of plant capacity, sufficient prices or logistical challenges.

5) While dumping milk has broad, negative economic consequences for the industry, it’s not as bearish as building additional cheese, powder or butter inventories.

6) Supply chain continuity is a front-and-center issue. The COVID-19 spiraling situation creates risks of disruption at just about every stop along the supply chain – farms, haulers, plants, ﬁnished goods transportation, retail stores. What happens to manufacturing plants in a tight quarantine situation? Who can continue to operate? Will instructions be clear? Industry leaders and associations will be busy at work staying in touch with government authorities in the days ahead.

7) Finding available cold storage space could be a mounting problem in some areas. Capacity was already tight as goods piled up when shipments of perishables to China slowed materially. This could create an even more aggressive selling environment as ﬁrms accelerate efforts to move product they cannot store.

8) A phrase we won’t be eager to hear again anytime soon once this crisis passes: “Out of an abundance of caution…” But, the fact we’ve heard it and read it over and over the past few days says the US is aggressively stepping up the ﬁght. We are much more in “social distancing” mode today than a week ago. Even if not uniform or universal, it has to matter. We suspect Dr. Fauci is right. If we seem to be over-reacting, we are probably increasing the odds for turning the tide. At some level it’s just math, right? Think of the number of other people you will encounter today compared to any given day six weeks ago. For most of us, the decline will easily reach 50%, for many it will be 90% for some it will be even more. Moreover, think of how many more times you are washing your hands and cleaning surfaces daily. Is that up by a factor of two? Of 10? Speaking of numbers, keep an eye on the death count in the US. As of this writing, it’s still below 100. As of today, deaths here are running at less than 2.0% of conﬁrmed cases, way below Italy (7.3%), and Spain (3.7%). According to World Bank data, in 2017, 27.0% of Italy’s population was over the age of 65, ranking second in the world. Spain was at #15 (19.4%) compared to the US at #36 (15.4%). Germany (21.5%) and France (19.7%) also rank high. Will the mood change if the US death count mercifully stays low?

9) The US economy will see major short-term economic impact, but the consensus could underestimate resilience on the other side. We already know that service-sector industries are immediately suffering a big hit. Layoffs are going to leap higher over the next two-to-four weeks. And, the pain will likely last through the second quarter. Just like after 9/11, it will take some time for planes, hotels and restaurants to ﬁll. But, our hunch is that, when we get the bounce, it goes faster and further than anticipated. Pent-up demand for living will be bubbling over. Plus, we will see massive stimulus measures along the way. Already, we see Congress working on efforts to pay for virus tests, boost paid medical leave and provide other assistance. Cheap gasoline will also play a role in restoring vitality. And economic concerns are not isolated to the US.

10) At some point, most or all of the bad news is in the marketplace. We exhaust capacity for surprise. We maximize fear. We get to a place where the market already anticipated the next few bad headlines. Potential grows for the news to surprise to the upside. Consider… we are already at no sports, no school, no travel, no church, no gatherings. Yesterday, a lot of places added “no eating in restaurants” to the list. We may not entirely be out of “no” moments or other bad news, but we’ve checked a lot off the list. Where will the good news headlines come from? Daily case-count growth in Italy begins to slide as harsh restrictions take hold? Tom Hanks and Rita Wilson offer a thumbs up when they leave the hospital in Australia? The economic beneﬁts of sub-$2 gasoline? The headline ﬂip will happen.

On balance, we see pockets of demand destruction, rampant uncertainty and seasonally increasing milk production weighing on dairy product prices over the near-to-intermediate term. Milk powder may be most vulnerable given that it’s not a consumer staple, exports remain tricky, balancing plants could remain crammed full for the next several weeks and key customers are embroiled in a crude oil price war. Cheese and butter prices could enjoy buoyant moments, riding shifting demand waves. But will prices rocket higher? That does not seem likely in the current environment.

Phil Plourd is president of Blimling and Associates, a research and consulting firm focused on the dairy markets. Blimling offers a wide range of services, including timely and insightful research publications, training and educational efforts, on-going advisement, consulting support and risk management services. To learn more about their services, visit blimling.com, dairy.com, or email pplourd@blimling.com.

Since its discovery in Wuhan, China in late 2019, the novel coronavirus (COVID-19) has reached pande...

Congress and the Administration have been working to develop and pass a series of bills to curb the...